What an absolutely spectacular event. On Nov 25th 2021, Egypt celebrated the restoration and reopening of its ancient “Sphinx Avenue” with music, fireworks, and a dramatic recreation of an ancient Egyptian religious procession. For me, it’s incredible to see, because it recreates what a ceremony of the Religion of the Sun would have looked like (though with some modern-day artistic license) in its ancient heartland in Egypt.

Here’s the video of the procession starting at my favorite part (which starts at 1:42:29).

Ancient Egypt is perhaps the most famous sun-worshiping civilization in the world. Its religion, so centered around the sun, stretches back to the very inception of its civilization, which some argue dates to around 3,000 BC, but I argue, is much older.

That’s why what’s happening in Egypt today is so remarkable. Egypt has embarked on an initiative to restore, celebrate, and bring its ancient sites back to life, and in doing so, has become a shining example to the world. I believe what’s missing from so many ancient sites is a recreation of the ancient ceremonies of the Religion of the Sun that took place within them, along with a renewed understanding of their true meaning.

The procession reenacts the ancient annual “Opet Festival,” in which the statues of the Father God Amun-Re (identified with the sun), his wife the Mother Goddess Mut, and their Son Khonsu, would be carried along the Sphinx Avenue, from the Temple of Karnark – the largest in the world – to the temple of Luxor.  It was here then, where the marriage of Amun-Re and Mut was celebrated, along with the “rebirth” of the pharaoh as their son, which was timed with the yearly inundation of the Nile and thus enacted the renewal and return of life to the land.1

This trinity of Father, Mother, and Son, we find in so many traditions of the Religion of the Sun, represents the three fundamental forces of life and creation. The rebirth of the pharaoh represented the birth of the Spiritual Son/Sun, which on a deeper level, happens not only in the world, but also within someone who is spiritually prepared, and was part of the hidden, initiatory knowledge of Egypt.2

Stretching 1.7 miles / 2.7 kms, the Sphinx Avenue is flanked on either side by 1,057 sphinx style statues. It was called “the Path of God” as it was the path the statue of Amun-Re took each year. It’s believed Luxor Temple and the Sphinx Avenue were built especially for this procession, and like so many other ancient sites, people have speculated they’re much older than currently thought.3

In case you missed it (as I did!) here also is the broadcast of the relocation of the remains of numerous ancient Kings and Queens of Egypt – ceremoniously officiated earlier in Egypt this year, in another awe-inspiring spectacle.

Here are some of the comments I’ve seen in response, and I couldn’t agree more:

AstroTheGamosian
It might be a childish fantasy of mine, but I would love to see a revival of these ancient cultures and religions (not just Egyptian, but Greek, Roman, Babylonian, and others, as well). I genuinely hope that this event sparks renewed interest in such a revival.

Maria Lopez
Since I teach ancient civilizations to my students here in the US, I was so excited and happy to see this! Amazing!! Can’t wait for my students to see this. It was so beautiful 🤩!!

Gilmara Benevides
Incredible. The Brazilian people congratulate the Egyptian people for this great event, worthy of all humanity.

Minhaj Arifin
First of all to all Egyptians my best wishes and congratulations on this magnificent new city and brilliantly delivered event! You brought history to life. At times it felt as if the ancients had returned on this magical evening going about their ceremonies in their own splendid manner, unafraid, confident of their majestic place on this planet. After thousands of years, you threw a party and they the ancient ones showed up! They spoke clearly with the sounds of the incredible orchestra and once again all our hearts were beating to the sounds of those magnificent drums! The monuments were glowing happily, they smiled at the respect you gave them. How precisely and wisely your artists spoke that night, how beautiful, enchanting were the sopranos, how unified and in harmony were the players of violins and those stringed instruments; so grand yet so intimate, the sounds of the flute came as a friend who accompanies you to new undiscovered lands. Our spirits vacationed with the ancient ones, we were one. Thank you.

Ahmed Hammam (tour guide at Luxor) interviewed by NBC News
“Tonight I will be witnessing one of the greatest events that has ever happened in my lifetime.” Hammam said that witnessing the restoration of the Avenue of Sphinxes after years of effort was “like a dream.” “Today will be a day we will talk about for a hundred years to come. I hope everybody will enjoy it. Not just here in my hometown city, but in the whole of Egypt, and the whole of the world as well.”

Thank you, from my heart, to all those involved in making these beautiful celebrations possible.

Meaning of the Karnak and Luxor Temples, the Winter Solstice and Opet Festival

My husband Mark has written about the meaning of the Karnak and Luxor Temples in his book (which I helped co-author) The Ancient Path of the Sun.

He explains how the main axis of the Temple of Karnak is aligned to the winter solstice sunrise. It is dedicated to the Father God Amun and his wife, the Mother Goddess Mut, and symbolizes the union of Amun and Mut, and the resulting birth of their Divine Son into creation as the rising sun on the winter solstice. The ancient Egyptians built Karnak as a representation of where Amun first brought forth creation. It is the macrocosm.

On the other hand, the Temple of Luxor is the microcosm. It is laid out in proportions that seem to correspond to a human body (as discovered by R. A. Schwaller de Lubicz). Depicted on its walls are scenes which show the Mother of the Pharaoh being spiritually impregnated by Amun, and then giving birth to the Pharaoh as a Divine Son. The Pharaoh’s Mother is said to be the earthly representation of the Mother Goddess, and the Pharaoh of the Spiritual Son/Sun as Horus (Khonsu, who was used as the Spiritual Son in the Opet procession, seems to have later replaced Horus). 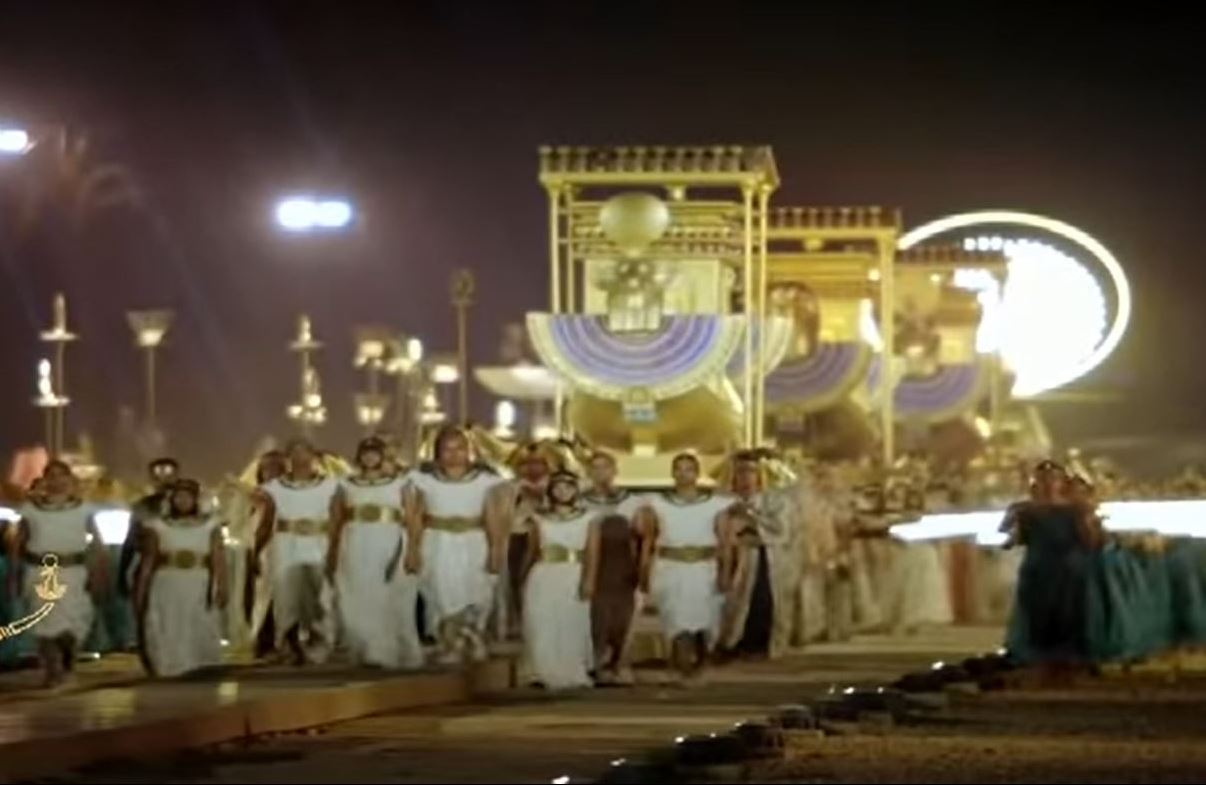 The procession of the triad of Father, Mother, and their Son, carried along the avenue from Karnak Temple to Luxor Temple.

The procession bringing the divine triad of Father, Mother, and Son from Karnak to Luxor along the Sphinx Avenue may symbolize these three forces coming from the place of first creation (enacted at Karnak), into a person and the world (enacted at Luxor). On a deeper level, the “rebirth” of the pharaoh, celebrated at Luxor during the Opet festival, symbolizes the Son incarnating within a person, and is timed with the beginning of the growing season in Egypt (which started around September) – showing how the Spiritual Son/Sun brings life to the world.

It enacted something extremely sacred. In essence, it symbolized bringing what is above, to what is below.  Bringing the divine forces from the temple of first creation (Karnak), to the temple of man (Luxor). Bringing the forces of the divine above, into a spiritually worthy person, and thus into the world below.