Out-of-Body Experiences – Our Natural Connection to Other Dimensions 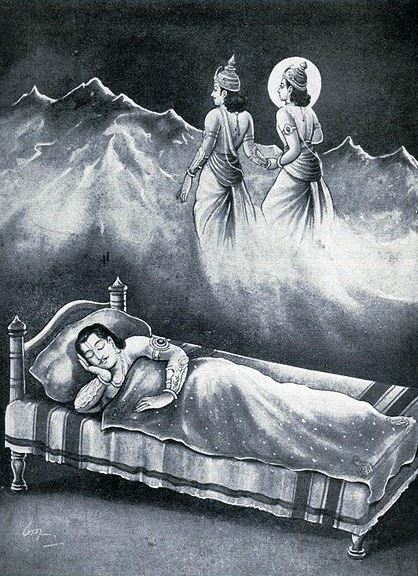 Krishna teaches his disciple, the prince Arjuna, whilst he is out of the body.

We have the potential to travel to other dimensions. We’ve always had this ability – in fact, it’s just part of what it is to be human. This should be the discovery of the century, if it hadn’t already been known for thousands of years.

Throughout history this latent potential has been alluded to by mystics the world over. Many divine visions, accounts of being caught up in the spirit, and journeys through heavens and underworlds, were actually the accounts of people who had out-of-body experiences and traveled to other planes of consciousness.

These other dimensions have been described in Hindu, early Christian, Buddhist, Taoist, Hermetic, Egyptian, and Mayan sacred writings as vast regions of both light and darkness, where the journey of our consciousness progresses through its various stages of learning—with the stage we’re in now being just one.

Science theorizes the universe may be multidimensional

Science now too is investigating the existence of these alternate planes of reality.

Today, many physicists openly admit that it is entirely likely that multiple parallel dimensions exist—in fact, some firmly believe it—the latest theory now being called the “Many-Interacting Worlds interpretation.” This is because at an atomic and subatomic level, all matter and energy is able to occupy multiple locations at once, and if we’re essentially made of the same stuff, then so can we.

It’s the same particle, it’s just that different parts of it occupy different places. Likewise, it’s the same us, but there are parts of us occupying different dimensions. And although this can be measured in experiments, it is not observable to the human eye—thus we have the seemingly finite, material universe in which we live, whilst at the same time being permeated by vast, parallel dimensions.

This is also being confirmed by the ever growing number near-death experiences. These accounts are corroborating concepts long held true in many sacred and religious texts—that essentially state we are multi-dimensional beings consisting of different parts, some of which exist and continue beyond the body in other planes of reality.

We only see a tiny fraction of reality

The frequencies of light and energy that make up our universe stretch infinitely, and yet our physical eyes perceive just a teeny, tiny smidgin of them we call the spectrum of visible light. “Ordinary matter,” which is the kind we see, is estimated to make up only 4.9% of all matter and energy in the universe—the rest science has dubbed “dark energy” and “dark matter,” because we can’t see it.

But this “vacuum,” which accounts for almost our entire universe, according to physicists, is infinitely dense—it’s just that we can’t see what’s in it using our physical senses or technology.

As Nassim Haramein, Director of Research at The Resonance Project, explains:

“Imagine that you took all of the stars we see in the universe—there’s billions of galaxies, there are billions of stars in them… and we took them all and we squished them all into a centimetre cubed of space with like this huge trash compactor or something. You still wouldn’t have the energy density of the vacuum… So to think of empty space as empty, is incorrect. Space is full… It’s full of this energy density…”

This basically means there is an inconceivably massive amount of room for other realms of reality to exist in our universe, right here and now, teeming with other forms of life operating in higher and lower frequencies of light and energy beyond our range of sight, which we are all connected to.

There’s been a big movement towards using drugs like DMT to explore these other realms of consciousness.

However, we don’t need outside stimulus—whether it be drugs or technology—to create an access point to reach something that is already a natural function of our body. If it required technology, then people from the past would have been shut off from it; or if we needed drugs, then our ability to explore other realities would be entirely dependent on their availability.

Instead, we’ve got all the tools for inter-dimensional travel within us, because as we have been fundamentally created with the purpose of spiritually awakening, everything we need to do it has been inbuilt into the human design. It’s simply a matter of practice.

Dreams – our natural connection to other dimensions

Inter-dimensional travel is literally as natural as sleeping. Every night as we drift into sleep, we go into dreams and enter an alternate reality where we are no longer constrained by physical laws—being able to fly, pass through objects, and sustain huge injuries without dying. 1

It is possible however, to step out of the physical world consciously, instead of in dreaming, and also to become conscious of being in another dimension whilst dreaming. It’s this connection that each of us has, which has allowed people through time to interact with spiritual beings, and receive knowledge about the process of life and awakening. 2

Taking a step to explore more of reality

There are lots of exercises to safely have out-of-body experiences, but there is a very simple way to start developing and learning about our connection to other dimensions straight away. As you go to sleep tonight, or any night, you can simply try and stay aware of the process of going to sleep. With a bit of practice, it’s possible to start noticing sensations you would have otherwise missed, and even eventually, feel yourself separate from your physical body. 3

Discovering that it is possible to travel inter-dimensionally is really just a first step, and opens up a raft of questions about ourselves, our potential, and what to use our time in other dimensions for.

What we are able to see and do in higher dimensions however, depends much on where we are on our spiritual journey, which is why out-of-body experiences are just one part of a much greater toolkit we’ve been given to use in the quest for spiritual awakening. 4

Have a wonderful solstice everyone! A time to celebrate and remember that beautiful light and star that sustains us and all life. Our most ancient tradition.

Yes and no. There is overwhelming evidence for contact between the ancient civilizations of Egypt and the Americas. They were both part of what I call the Lost Civilization of the Sun. This civilization was the inheritor of the knowledge of Atlantis.

There are many haunting similarities between ancient Egypt and ancient Mexico, including (see image) the mysterious "Ouroboros" symbol . A legacy of ideas from a lost global civilization that left its fingerprints in many different parts of the world? Photos by Santha Faiia.