Why We Have a Need to Know About the Esoteric 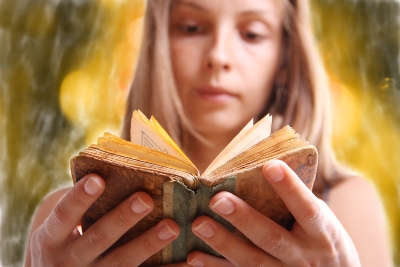 Esoteric knowledge has played a fundamental role in many civilizations throughout history, including our own, and yet the UK is looking to censor “esoteric material” across the internet by the end of this year. This is not being spoken about openly, and is likely to set a precedent for other proposed internet filters around the world, as the UK’s filter appears to have already been influenced by the French company Orange’s filtering of “esoteric practices” and “universally acknowledged sects” in the UK.

It may not be immediately apparent to most people as to what the implications of this are, and it seems at some level there is an attempt to take advantage of the lack of understanding of what the word “esoteric” actually means.

To many people, “esoteric” denotes something obscure, incoherent and belonging to the old libraries of mystical texts, and even as something negative to be feared. But in reality it is literally all around us and absolutely crucial to the understanding of our collective human history and experience. This is the reason why its censorship is so dangerous and should be ringing alarm bells for everybody.

Esoteric is simply a word that denotes something “hidden” and understandable to an enlightened few. Fundamentally, it describes the hidden nature of reality, and anyone who experiences it. Many believe that the physical world of matter is all there is, but although other realms and dimensions, consciousness, non-physical beings etc., are not ordinarily visible, they are widely reported by people who have near-death experiences, and likewise by those who have mystical experiences. The expression of the experience of these “esoteric” realms can literally be found almost everywhere, in religious texts, ancient cultures, traditions, and mythology; it has run through most societies just as it runs throughout ours today. 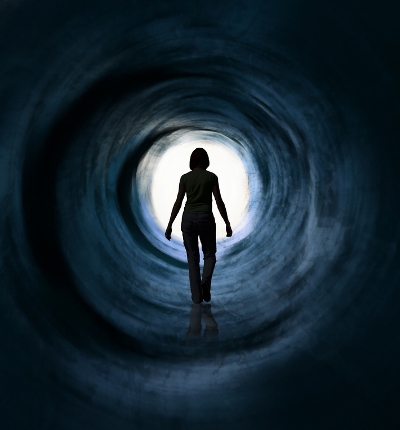 There are now thousands (if not hundreds of thousands) of compelling accounts of people who have experienced leaving their bodies in a near-death experience, and witnessing the hidden or “esoteric” side of reality.

Anyone who gains experience through remote viewing, telepathy, altered states of consciousness, prayer, visions, dreams, religious or mystical experiences, psychic and paranormal phenomena, self-knowledge, or who has a supernatural encounter of any kind, etc., whether for good or bad purposes (because it’s possible to do both), is accessing normally hidden, or esoteric information about life and reality.

This kind of esoteric knowledge can be found throughout religions—each containing a host of supernatural encounters and events etc. It can be found in yoga, meditation, the whole of the New Age, and even in the symbols of crop circles. Some of the most famous esoteric symbols in the world, such as the pentagram, yin and yang, spiral and swastika, can be found in nature and the cycles of the planets and sun – for example, the planet Venus makes a pentagram in its orbit around the sun in its relation to the Earth every eight years.

Esotericism is not particular to any belief or tradition, but has existed in almost all of them. This is why so many similarities can be found between diverse spiritual texts and teachings, although separated by vast distances and time; esoteric practitioners all over the world and throughout history have, using a myriad of different techniques, discovered similar or the same information about the hidden nature of reality and expressed it according to their own unique environment and culture.

Esoteric symbols are used prolifically in movies, music, and the entire entertainment industry. They are found in the institutions of society, such as governments, corporations, law and royalty, and have overtly done so throughout the world since recorded history from ancient Sumer and Egypt, through the Roman Empire, right up into the United States today. 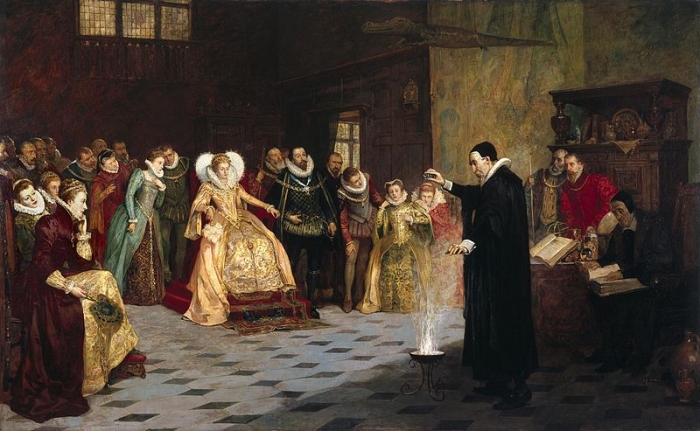 The occultist, astrologer, and consultant to Queen Elizabeth I, John Dee, performing an experiment before her. 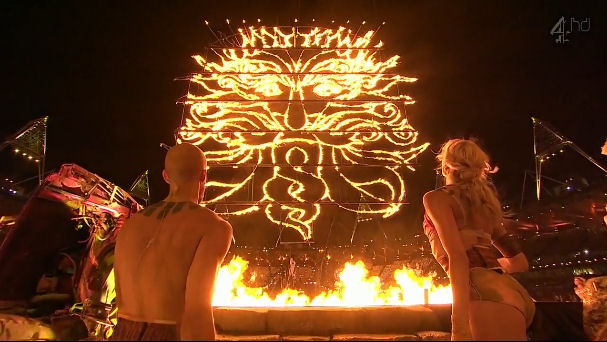 The Druid god “the Green Man” at the 2012 Paralympics closing ceremony.

The UK itself has a vast history of esoteric knowledge, stretching from at least the times of the ancient Neolithic and Beaker peoples who built some of its ancient megalithic sites, through the Druids, the legends of King Arthur, up unto the proliferation of diverse religious, spiritual and esoteric groups throughout the UK today. Queen Elizabeth I had an occultist and astrologer, the famous John Dee, serve as her consultant. Esotericism is even taught as a subject at universities in Amsterdam and Exeter in the UK. The 2012 London Olympic and Paralympic ceremonies were teeming with esoteric symbols – the central setting of the London opening ceremony was the ancient esoteric site of Glastonbury Tor, and the organizers of the Paralympic ceremony actually contacted the British Druid Order to get permission to use some of their ceremonial wording. 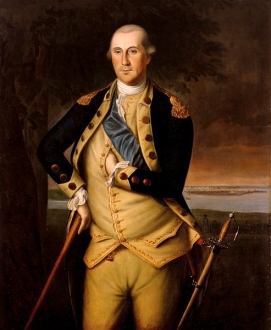 Portrait of the first president of the United States republic, George Washington, doing the Freemason “hidden hand” sign, in this painting from a year that changed the course of world history – 1776.

Esoteric societies are part of the history of the formation of much of the western world. President Roosevelt regarded the library founded by the great esoteric writer Manly P. Hall in Los Angeles, which housed a collection of ancient spiritual writings, a national treasure and had its contents copied (microfiched) during WWII to safeguard them. The United States republic was created in part out of secret societies, most notably Freemasonry; George Washington was a Freemason as were a number of the “Founding Fathers”. The Statue of Liberty bears an uncanny resemblance to the ancient goddess Hecate, and was created by a French Freemason. The US capital Washington DC is awash with esoteric symbols, as is the US dollar bill; today dark esoteric groups continue to control structures of power behind the scenes in order to exert their influence over the entire world.

The mainstream media has marginalized, demonized and effectively conducted a witch-hunt against people gathering to practice alternative spirituality and experience higher/mystical states of consciousness, whilst at the same time celebrating its use for dark purposes. Today the most popular music videos and live performances contain genuinely demonic esoteric symbols and rituals—with inverted crucifixes, mock sacrifices, satanic worship etc. 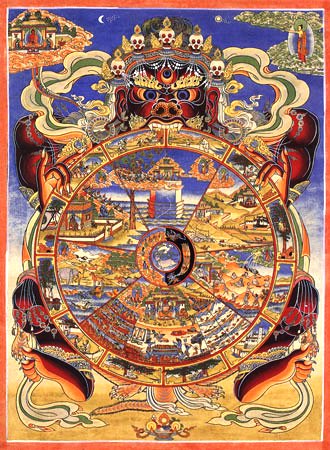 Buddhist painting of the Wheel of Samsara, which is an esoteric depiction of the process of life.

To those who don’t have experience of the hidden nature of reality, the esoteric symbols of ancient sacred teachings can appear obscure, nonsensical, even primitive, and are commonly misinterpreted and derided. In fact, the notion that anything but physical reality even exists is scoffed at by some. Yet those who have a shared experience of these hidden realities can understand them, and as the numbers of people who experience extra-sensory realities is rarely high, the word esoteric has come to describe a knowledge that is limited to a small few—but it doesn’t have to be that way.

The fact that knowledge of the esoteric aspects of our history have been stripped out of the school curriculum, the mainstream media, and now potentially out of the internet, is testament enough that those controlling society’s most powerful institutions, do not want people to know about it, and they have demonstrated a preference for engrossing the majority in rampant materialism based on the gratification of all things physical and sensory. And I might add, to subject them to malevolent esoteric symbols whilst blocking them from understanding what they are being subjected to.

The knowledge of hidden realities has been used against populations for sinister purposes throughout history—for domination, control, and deception. But it has also throughout history been used for good, to help raise people’s level of consciousness, to bring higher values into society, to empower people to control their own destiny, and alleviate suffering—it all depends on the hands it’s in. Therefore, it should not be taken out of the hands of the people, or those who would use it for good, and kept only for those in power who would prefer to keep the discussion of it censored. 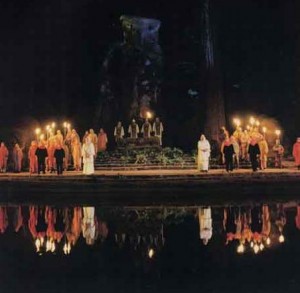 Some of the most powerful and influential people in the world taking part in an esoteric ceremony at Bohemian Grove in California.

Knowledge about the nature of existence, the purpose of life, alternative ways of understanding the universe and even knowledge of our own history, should not be censored, nor should our right to examine the use of esoteric knowledge by those in positions of authority, such as the secret societies of Bohemian Grove and Skull and Bones, which have been attended by numerous US presidents and many of the most powerful and influential people in the world. All human beings should be free to explore esoteric realms and likewise be free to express their findings and share them without restriction. This is crucial for the collective development of human consciousness, our creative potential, and our ability to work together to address the greatest questions and mysteries of life.

The men of the Smithsonian - the original Men in Black. Thousands of giant skeletons and out of place artifacts simply vanished without a trace under their stewardship. "You didn't see anything..."

The cover up of giants in North America began back in 1881 with the founding of the Smithsonian's mound research division. Despite thousands of finds of giants and foreign artifacts, they dogmatically concluded that Native Americans built everything and nothing has changed since.

23,000 year old footprints have just been discovered in North America. I believe the oral histories of the Native Americans are some of the oldest histories in the world. We need to take them seriously and listen to them right now. https://phys.org/news/2021-09-earliest-evidence-human-americas.html

Native Americans have stated there was an advanced ancient civilization destroyed by a cataclysm in the Americas, which they attribute to giants. I applaud Hancock's work, but he dismisses these accounts & over 1,000 reports of giant skeletal finds as "rumors" when they are key.

Recent news highlights a discovery that confirms humans were in the America's 23,000 years ago. Story here: https://www.bbc.com/news/science-environment-58638854. But let's not forget the evidence of humans in the Americas 130,000 years ago. Latest on that story here: https://www.sciencenews.org/article/stones-mastodon-bones-debate-america-first-settlers.

It's equinox today. The scales are an ancient symbol of equinox, used to judge the soul. On one side is the dark half of the year, on the other the light. On one side our bad actions, on the other our good. Which side do you weigh most heavily on?